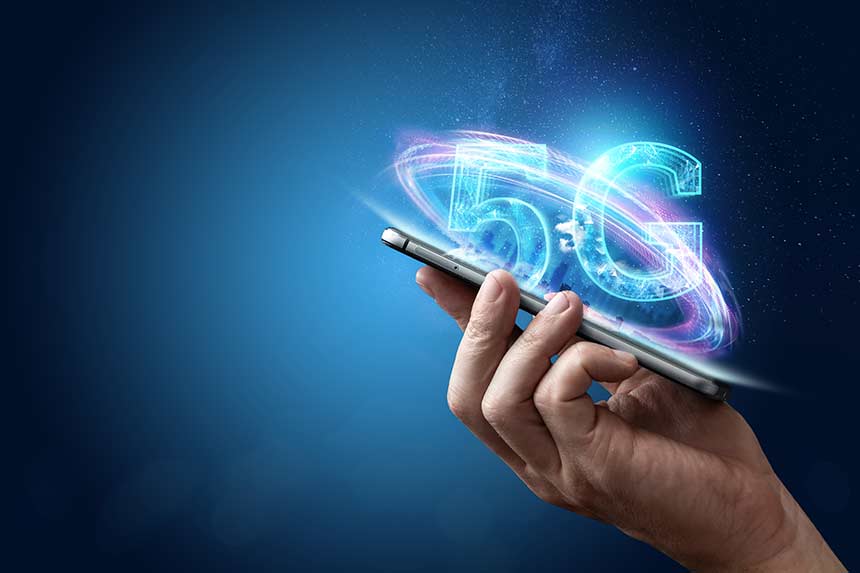 THE FUTURE DEPENDS on connectivity. From artificial intelligence and self-driving cars to telemedicine and mixed reality to as yet undreamt technologies, all the things we hope will make our lives easier, safer, and healthier will require high-speed, always-on internet connections.

To keep up with the explosion of new connected gadgets and vehicles, not to mention the deluge of streaming video, the mobile industry is working on something called 5G—so named because it’s the fifth generation of wireless networking technology.

The promise is that 5G will bring speeds of around 10 gigabits per second to your phone. That’s more than 600 times faster than the typical 4G speeds on today’s mobile phones, and 10 times faster than Google Fiber’s standard home broadband service—fast enough to download a 4K high-definition movie in 25 seconds, or to stream several at the same time.

Eventually anyway. US carriers promise that 5G will be available nationwide by this year, but the first 5G networks won’t be nearly so fast. 5G isn’t a single technology or standard, but rather a constellation of different technologies, and deploying them could require a radically different approach than building 4G networks. Carriers have launched demos and pilot programs that demonstrate big leaps in wireless performance, but mobile networks based on the “millimeter-wave” technology that may deliver the fastest speeds probably won’t be widely available for years.

In the meantime, companies will likely build “5G” networks based on other technologies that are at least faster than today’s networks but rely on existing infrastructure.

But there’s more to 5G than just speed; 5G technologies should also be able to serve a great many devices nearly in real time. That will be crucial as the number of internet-connected cars, environmental sensors, thermostats, and other gadgets accelerates in coming years.

A lot is riding on the deployment of 5G in America. Industry experts and political leaders across the spectrum warn that it’s possible for US companies to fall behind the curve if China or some other country is able to build the foundations for 5G more quickly. To reach the goal of nationwide 5G by 2020, the government must open more wireless spectrum to carriers; the carriers must rapidly expand their infrastructure; and hardware makers need to create a new generation of devices ready to ride the 5G waves.

The fallout of 5G in our health

At the root of all concerns about cell phone networks is radiofrequency radiation (RFR). RFR is anything emitted in the electromagnetic spectrum, from microwaves to x-rays to radio waves to light from your monitor or light from the sun. Clearly, RFR isn’t inherently dangerous, so the problem becomes discovering under what circumstances it might be.

Scientists say that the most important criterion about whether any particular RFR is dangerous is whether it falls into the category of ionizing or non-ionizing radiation. Simply put, any radiation that’s non-ionizing is too weak to break chemical bonds. That includes ultraviolet, visible light, infrared, and everything with a lower frequency, like radio waves. Everyday technologies like power lines, FM radio, and Wi-Fi also fall into this range. (Microwaves are the lone exception: non-ionizing but able to damage tissue, they’re precisely and intentionally tuned to resonate with water molecules.) Frequencies above UV, like x-rays and gamma rays, are ionizing.

Dr. Steve Novella, an assistant professor of neurology at Yale and the editor of Science-Based Medicine, understands that people generally get concerned about radiation. “Using the term radiation is misleading because people think of nuclear weapons—they think of ionizing radiation that absolutely can cause damage. It can kill cells. It can cause DNA mutations.” But since non-ionizing radiation doesn’t cause DNA damage or tissue damage, Novella says that most concern about cell phone RFR is misplaced. “There’s no known mechanism for most forms of non-ionizing radiation to even have a biological effect,” he says.